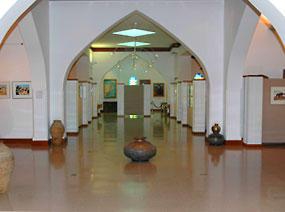 The private museum, which is supported purely by the Zubair family, its founders, opened to the public in 1998. Inside can be found the family’s privately owned collection of Omani artefacts along with a wealth of information revealing an insight into Oman’s culture and history.

The museum received His Majesty Sultan Qaboos’ Award for Architectural Excellence in 1999; a notable achievement as it was the first time it was awarded in Oman.

There are three separate buildings that make up the museum and a garden, which also doubles up as an exhibition space, for sculptures in particular.

Bait Al Bagh is interesting, as it was once inhabited by Sheikh Al Zubair bin Ali, who was minister and advisor to three former Sultans. Built in 1914, the house was latterly transformed into the museum you see today whilst keeping some of the essential Omani architectural features.

Examples of Omani male and female national dress, complete with khunjar (Omani dagger), swords and jewellery are displayed along with items found in the household. This house features fascinating exhibits from the Al Busaidi dynasty as well as portraits of Sultan Qaboos bin Said.

Outside the house you can wander through a replica souq (market), a falaj (water distribution system) and a display of housing and boats.

Nearby is Bait Dalaleel, a restored traditional building which offers the visitor a unique opportunity to glimpse what life was like for Omani people over a century ago.

Furthermore, Bait Al Zubair is home to two remarkable ancient canons, presented to the museum on the occasion of its opening by His Majesty Sultan Qaboos bin Said.