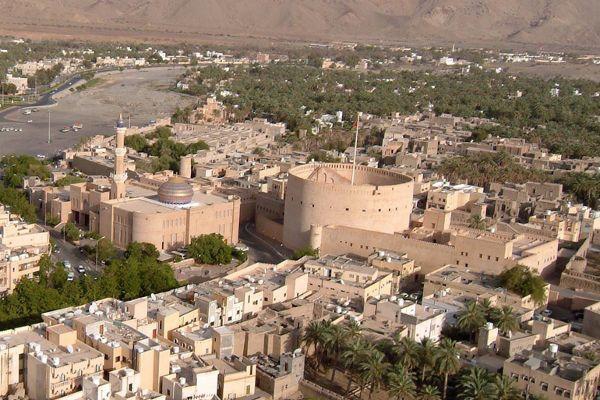 As forts go, Nizwa Fort in the Dakhillia region is one of Oman’s oldest and finest and a massive tourist attraction.

The town itself is steeped in history as Nizwa is the historical capital of Oman and was the centre for trade between the interior and coastal regions. Nizwa, the ‘Pearl of Islam’, was previously a sanctuary for writers, poets, scientists and religious leaders, and rightly so became the cultural and political capital of the country. The ancient souq is still bustling with activity today and together with the fort, they draw many visitors to the area. Nizwa, an oasis settlement, is made fertile by the Falaj Daris, which is classed as a UNESCO World Heritage Site.

Nizwa fort was built during the Ya’ruba Dynasty and took over twelve years to build. The fort is a complex and consists of a castle, which would have been used as a residence and for administration, and a fort, which was built for defence. The castle pre-dates the citadel by several centuries. The towered citadel is 36m high and 36m wide and has a circular gunnery platform with ports from which twenty three cannon are positioned. This arrangement enabled a full 360 degree radius to be covered defensively.

Inside, the fort is dotted with cunning traps to keep intruders from wandering further into the building. Flights of stairs are interrupted with steep sided holes, temporarily covered with planks of wood, which could be hastily removed as an intruder approached. Likewise, deep pits would lie unsuspectingly behind internal doors.

Various cannon protect the inner and outer portals, including an 18th Centuary Swedish Finbanker, an Omani cannon with Arabic calligraphy inscribed on it and a British cannon dated around two hundred years ago.

The former prison area has the new function of an exhibition hall containing twenty galleries, each detailing a different element of Nizwa’s history and heritage. Another room is set up to depict a prison environment, complete with relics such as the horrific leg irons, to demonstrate the prisoners’ severe treatment. Wells, baths and date stores have been preserved in their original form to reveal a glimpse into the past.

The galleries have been expertly decked out and contain a wealth of information and artefacts to entertain the visitor. Multimedia presentations, historic maps and written quotations from famous travellers combine to explain the system of Omani forts and castles and the history of the ancient architecture. Modern day restoration projects such as Nizwa souq are also detailed.

There are gallery rooms devoted to traditional crafts such as date palm basket weaving, silver and copper work and indigo dye used for colouring textiles. Authentic workshops have been set up to show craft tools, which would have been used for the individual crafts.

Much time can be spent looking, particularly by children, at the scale model of Nizwa town, which shows its position as an oasis city. Also of youthful interest is the castle armoury, which displays a collection of traditional weaponry and ammunition, including antique khunjar, swords and rifles.

After many hours spent immersed in history, the visitor can refresh and recharge in the café, situated in the old stable block, or in the ‘arish house constructed traditionally from palm fronds.

Local artisans demonstrate their crafts in workshops and the Omani Heritage Boutique provides an opportunity to purchase a unique souvenir such as local antiques, textiles, metalwork and handicrafts.

It is a good idea to check with the Ministry of Heritage and Culture (+968 24641300) before you embark on a trip to forts or castles, as on-going renovation projects can mean different opening times to those published.